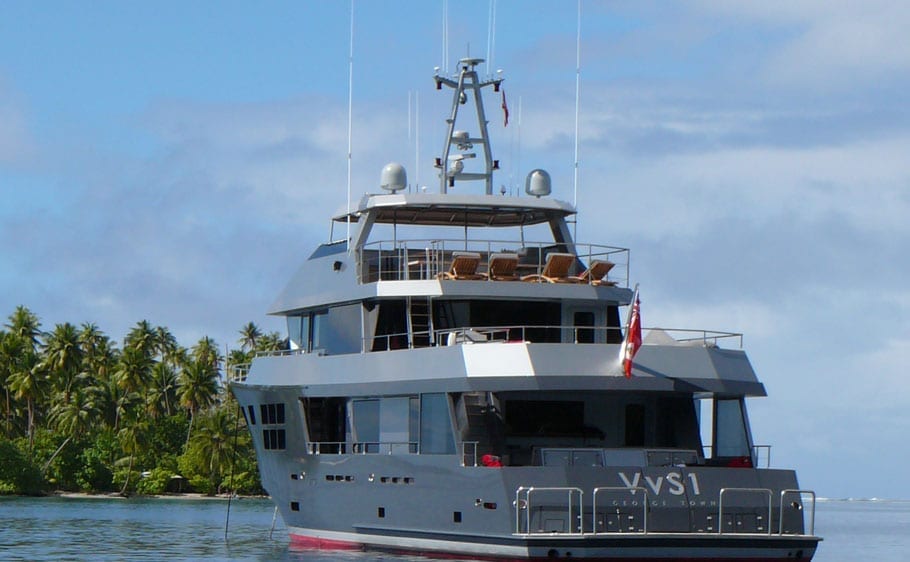 Wind your way along the wild remote waters of Australia in sophisticated luxury aboard Akiko. Taking inspiration from her origins in New Zealand, her name, ākikō, in Moari means “at a distance from home”. A fitting moniker for a yacht that is perfectly made for expedition style exploration. With her versatility, Akiko yacht for charter can enter small bays, or anchor behind coral atolls for a spot of game fishing in submarine reefs.

Built by Alloy Yachts to Lloyd’s Registry standards and MCA compliant, Akiko was first launched in 2007 and went on to pick up five major honours at the 2008 World Superyacht Awards. With her striking angular shaped aluminium exterior, engineered by Gregory Marshall, the customised yacht turns heads wherever she goes. Undergoing an extensive refit in New Zealand in 2016-2017 by McMullen and Wing, her interior is as equally as impressive.

The light modern interior exudes spaciousness as well as the highest level of comfort and convenience. An open plan galley, library/TV room are among the top-notch facilities on board to make your luxury chartered voyage a very pleasurable one. Embellished with distinctive colourful pieces of art throughout the interior of the main deck, the Akiko yacht for hire has style in abundance.

Accommodation sited on the bridge deck and lower deck, is of a luxurious standard, serving ten guests with one king, one queen and six single beds. Each room is well appointed. From the master bedroom suite’s expansive picture windows to the VIP ensuite the mood is of pure carefree decadence.