Be prepared to be wowed by Croatia’s hidden gems. Blessed with stunning anchorages on getaway islands and historic cities teeming with local culture and heritage, Croatia is a yacht charter dream come true. With only 66 islands out of 1,185 being inhabited, you have an untouched natural paradise playground to explore and feel at one with. Simply find your own secluded spot, drop anchor and just connect with the beauty that’s all around you.

Drift from a kaleidoscope of wild pristine green landscapes and honey hued, craggy limestone-cliffed seascapes bathed in sun to well-preserved ancient cities, rich with time-honoured traditions. Scattered along Croatia’s coastline are thousands of enchanting islands offering an unlimited variety of itinerary options when building your perfect luxury yacht charter holiday. Here, like the country’s mythical legends are just a few magical destinations that are waiting to leave you spellbound.

Dubrovnik
Stroll the pristine limestone streets of the circular walled old town, presided over by six fortresses, and feel that time has never moved on in centuries. This ‘Pearl of the Adriatic’ is a gorgeous setting to soak up the relaxed stylish Mediterranean café culture.  Eagle-eyed Games of Throne’s fans among you may spot the locations used for the series’ dramatic scenes.

Korcula
Korcula’s historic old town, with its orange tiled roofs, chunky stone walls, majestic squares, palaces and imposing defence towers is akin to Dubrovnik, in miniature. Said to be the birthplace of the explorer Marco Polo, one of the city’s popular attractions is a house charting his intrepid life and adventures.

Korcula bestows a treasure trove of idyllic secluded bays and beaches providing plenty of opportunities to swim and snorkel in the glittering clear blue sea. There’s the small pebbly Bacva Bay near Pupnat and in Lumbarda, the child-friendly sandy beaches Bilin Zal, Przina and Tatinja. Venture inland and you can uncover abundant vineyards and olive groves, on one of the greenest islands in the Adriatic Sea.  While stopping at a local restaurant, we recommend sampling top quality local wines such as the dry white speciality made from the Grk grape.

Split
Roman antiquities are all around the elegant city of Split, such as the Diocletian’s Palace built in the 4th Century and Split Peristyle, one of the country’s most beautiful squares. It is surrounded by another picturesque architectural wonder, the Cathedral of St. Dominus. Follow in the footsteps of romantic couples and take an evening stroll on the promenade nearby. Or perhaps walk, run or cycle the city’s Marjan forest park. For a lazy day relaxing in the sun, Split offers several clean sandy family beaches. You may see the game of picigina being played in shallow waters, which involves players throwing a small ball to each other and performing all sorts of acrobatic moves to avoid it not touching the water.

Trogir
Marvel at this magical romantic pocket-sized island. Trogir is composed of a town that’s packed with ancient palaces, churches and fortress towers.  Neatly wrapped in medieval walls it’s connected to the mainland and the island of Čiovo by bridges but feels like it’s in a wonderful old world of its own.

Hvar
Popular with luxury yacht travellers, the island offers a heady mix of designer shopping, sophisticated alfresco restaurants, exquisite wineries and a glamorous and buzzing nightlife. Positioned at a nautical crossroads, Austrian, Venetian and Byzantine empires have all left their distinctive mark on the art and culture on this cosmopolitan island.  In the port town of Hvar, a wealth of interesting sites such as the old cathedral, fortress, and Franciscan monastery grace the charming cobbled streets and grand squares. Also worth a visit is the town of Stari Grad and the 15th Century Dominican monastery. Surrounded by acres of olive groves and lavender fields, it’s a rural idyll. 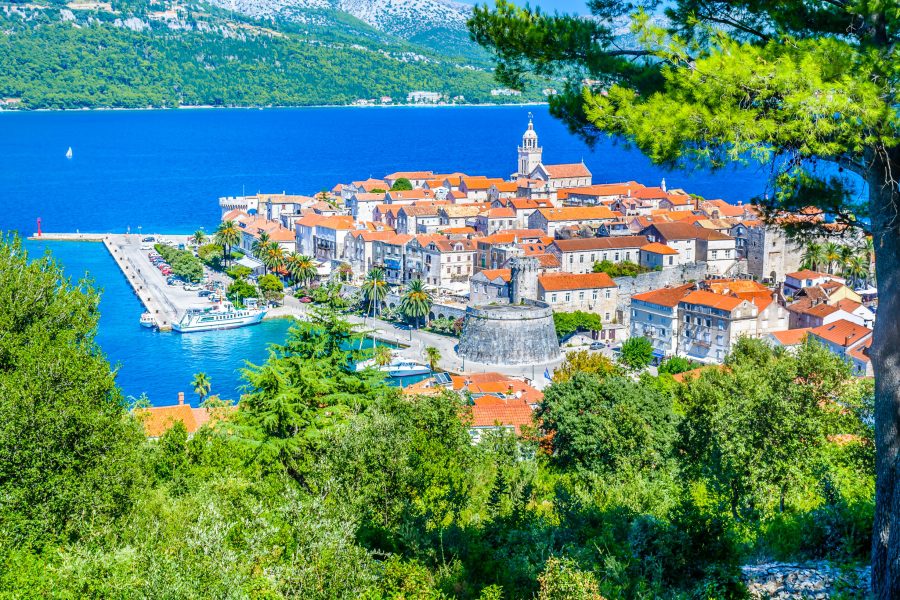 Krka Waterfalls
North of Trogir lie the beautiful Krka waterfalls in the protected Krka National Park. Flanked by the tranquil waters of the Krka River and in a lush green landscape are some hidden natural gems; seven waterfalls cascading from intriguing rocky karst formations. Hiking trails take you to the stunning waterfalls, past impressive cascades such as Roški Slap as well as a monastery and Roman catacombs.

Vis island
By boat is the best way to seek out the hidden shores of this picturesque unspoiled island. Stivinia Cove is a must. High cliffs provide a spectacular gateway entrance to a scenic cove and pebbly beach – voted as one of the best beach destinations in Europe.  Another feast for the eyes are the Blue and Green Caves. A firm favourite with sea-kayakers, the waters here glow in an hypnotic palette of colours from aquamarine to indigo.

Drvenik Veli
The lagoon off this island (one of a trio) is a veritable swimmers’ paradise. Take a relaxing plunge in crystal clear and turquoise blue waters. Against the backdrop of olive groves and herb covered hills, you’ll feel lost in peaceful serenity.

Zlatni Rat
This iconic stunning beach located in the island of Brač is instantly recognisable from many a Croatia travel brochure. The distinctive landform wraps around a spit, forming a blunt tip that juts 634m  into the sea, earning the nickname Golden Cape/Golden Horn. Anchored off the pale ivory sands you can get the chance to explore the area while also take part in windsurfing, parasailing, diving or kayaking.

Kornati islands
This remote barren archipelago of 89 small and large islands covering 217 km2, in the region of Dalmatia near to Šibenik, offers a striking contrast to anything else you will experience whilst cruising around Croatia.  Dotted with a handful of simple houses, life here is as rustic as it gets among the wild reefs, grottos and archaeological sites. When you’re not snapping shots of this photogenic wonderland you can enjoy many hours hiking, snorkelling, diving and swimming.

To find out more about embarking on an exciting charter around Croatia’s many island treasures, call our expert Princess Yacht Charter advisers on +44 (0)207 499 5050 or email us.