A luxury Mediterranean cruise by yacht provides coastal access to several countries and cultures. The best time of year for yacht chartering in the Med is from April to October.

Here we explore the islands of Corsica and Sardinia: two of the quintessential Mediterranean cruising itineraries.

Discover the deep blue waters of Corsica’s wide bays, rugged mountainous backdrops and picture postcard ports. Then move on to the manicured luxury of Sardinia’s Costa Smeralda, with its stunning cruising grounds, and Porto Cervo’s designer shopping and nightlife.

Sardinia is Italian and bedazzles with luxury shopping and high-class restaurants. Corsica is French with rugged landscapes and medieval towns. A wild and mountainous place, Corsica’s coastline is rugged and uncrowded with rocky coves, white sand beaches and ancient, fortified villages.

The old town of Bonifacio perches on the edge of towering, limestone cliffs, unbeatable for sheer natural beauty. Known for its lushness and the fact that it is so untouched by development, this is a place for those seeking the Mediterranean as it used to be; part of the coastline is nominated as a UNESCO World Heritage Site, ranking it alongside the Great Barrier Reef and the Galapagos Islands as a nature reserve of global importance. 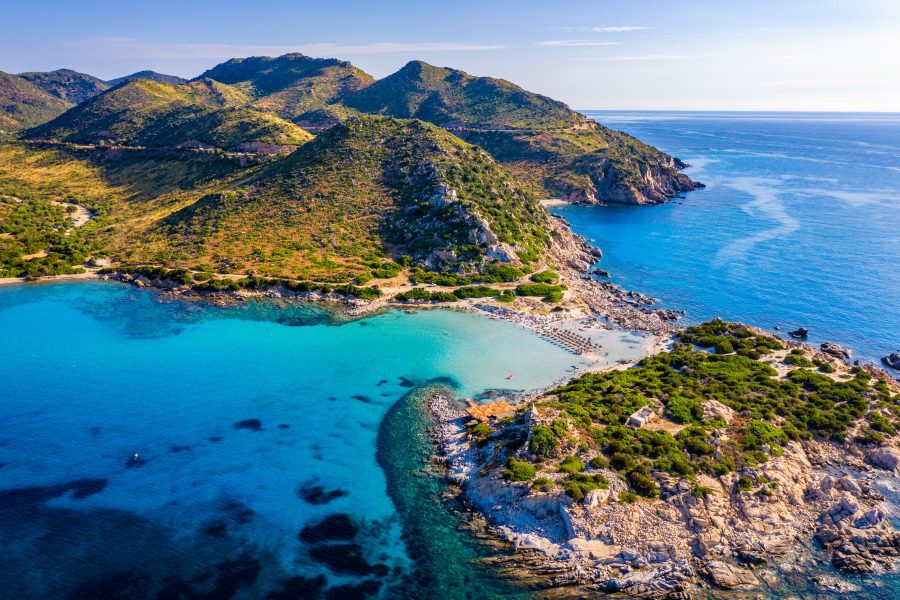 Least forgetting Bonifacio which brims with vibrancy from the harbour up and is one of the most spectacular natural harbours in the world not to be missed with the most spectacular views of Sardinia. From your luxury Mediterranean cruise, you can explore these beautiful coastal towns at ease and from a different point of view.

In contrast Sardinia boasts designer boutiques from Armani to Versace, with yachts gravitating to the Costa Smeralda in the north-east, with Porto Cervo at the centre of any visit. Cafes on the main square are perfect for people-watching before such culinary delights at Cipriani or Madai Ristorante.

Along the northeast coast of Sardinia Tavolara Island offers one of the most amazing landscapes, flora and fauna as the island and the surrounding waters are part of the Tavolara and Punta Coda Cavallo Marine Preserve.

Chia and the east coast coves south of the small scale resort of Cala Gonone offer the best beaches in Sardinia.

The village of Chia itself is set back from the sea with pristine white sandy beaches surrounded by turquoise waters, while just inland the Spartivento and Chia lagoons are significant and vital flamingo breeding grounds.

Princess Yacht Charter offers a wide selection of luxury Mediterranean cruises available for cruising in both Sardinia and Corsica.