The Mediterranean has long been the go-to destination for Europeans in search of a special yacht charter holiday. And with established superyacht hotspots like Spain, the Balearics, Corsica, Sardinia and the French and Italian Rivieras, it’s very easy to see why. In addition to the wall-to-wall glamour, the glitzy nightlife and the boutique shopping, these places enjoy enduring favour with the world’s most celebrated celebrities and an easy cultural confidence that feels deeply satisfying for visiting yachtsmen. But with longer seasons, lower prices, emptier waters and (arguably) more authentic and unaffected shoreside entertainments, the eastern Mediterranean is also now a major player in the world of charter. The scattered archipelagos and brilliantly reliable climates of places like Greece, Croatia, Montenegro and Turkey are certainly tailor-made for enjoyable yacht charter but, for many, it’s the unpasteurised cultural backdrops of these places that really make the difference. Whether you prefer Croatia’s UNESCO protected maritime cities, Greece’s whitewashed fishing villages or Turkey’s eastern-influenced vibrancy, the addition of the eastern Mediterranean to the classical destinations of the west means that the Med can now deliver pretty much any kind of yacht charter experience you like.

The Balearics chain is one of the world’s most iconic yachting destinations. For the slow serenity of secluded coves, ancient monuments and protected marine parks, Menorca in the east and Formentera in the far west are ideal. If you prefer the pace a little more upbeat, Mallorca brings a lovely middle ground, thanks to the sophisticated arty vibe of Palma’s café-strewn streets. And while it might be famous for its all-night clubbing scene, Ibiza’s natural loveliness and long, textured history makes it an almost impossibly chic place to while away the hours.

Nestling between the French Alps and the Mediterranean Sea, with St Tropez at one end and Monaco at the other, the Cote d’Azur remains a glittering bastion of exclusivity and prestige. But believe it or not, it’s about much more than just world-class restaurants, glamorous events and pioneering superyachts. There’s great whale watching to be had in these parts, as well as a thriving local market scene, blissful food & drink and plenty of fishing, diving, hiking and skiing. Yes, the boutique shopping is off the chart and the average back street has the feel of a supermodel catwalk, but for those in the know, the French Riviera is capable of delivering a far more textured yacht charter experience than people imagine.

The Italian Riviera, which inhabits the arc of Ligurian shoreline between San Remo and Portovenere in the northwest of the country, is more relaxed, more informal and more rustic feeling than its French equivalent. But that’s certainly not to say it lacks sophistication. On the contrary, this implausibly beautiful region is littered with delightful fishing villages – some of which have a simple time-capsule loveliness and some of which hit you with a truly stratospheric level of glamour. It certainly gets popular in season but with its magical cliff-top walks, its hidden bays, its perfect seafood and its laid back atmosphere, it serves up a combination of poise and rusticity that is truly addictive. 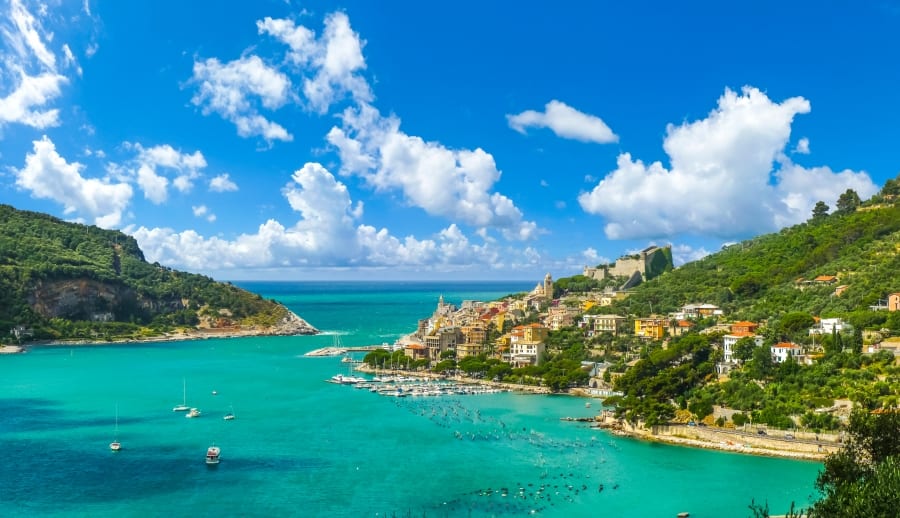 Corsica is a deeply exciting Mediterranean destination. Perched between the Cote d’Azur, the Italian Rivera and the north coast of Sardinia, everything about the place, from the history to the food, the drink, the events and the traditions, feels uniquely (and resolutely) Corsican. Verdant and volcanic, with 600 miles of impressively undeveloped coastline, the eastern side of the island is great for harbour-hopping between shallow sandy beaches. The west coast, however, is radically different, with a deepwater shoreline that presents a vast fractured maze of sea stacks and cliff faces. It’s a brilliant playground for superyacht exploration.

Astonishingly, the Mediterranean island of Sardinia accounts for 25% of Italy’s entire coastline, so it’s no surprise that its yacht charter offering is so diverse. The island’s capital, Cagliari, is a delightfully suave place to indulge in the trappings of city life, Italian-style. Up in the northeast of the island, famous party resort, Porto Cervo, is also a big draw. And then there’s the sheer wildness of the place. With a shoreline closer to Africa than Italy, the summer is long and hot. And with the island’s rich concoction of sandy bays, rocky outcrops, caves, corals, wrecks and inlets, the watersports are every bit as enjoyable as the yachting.

With around 1,200 islands and one of Europe’s sunniest climates, Croatia’s Adriatic coastline is almost absurdly perfect for yacht rental. Whether you go from Split to Dubrovnik or from Rjeka to Zadar, there is always a place to hide from the breeze, to settle on a secluded anchorage or to source a warm, shallow-water zone for relaxed family watersports. And when you step ashore, the maritime heritage is deliciously palpable. The vast fortified seafaring cities of Dubrovnik and Split are clearly a major draw but smaller, more modest places, like Korcula Town, feel just as special in their own way. Supplement all that sightseeing with vineyard visits, strolls among olive groves and wreck dives among turtles and it’s a difficult place not to love.

Greece offers the rental boater more choice and variety than almost any other yacht charter destination in the world. In fact, with 9,000 miles of coastline and more than 2,000 islands, the yacht charter options can feel almost bewildering. Do you head for the iconic historical highlights of Athens, Santorini and Rhodes? Do you head for the infamous party hotspots of Mykonos, Zakynthos and Kos? Or do you keep it relaxed and serene in traditional retreats like Kefalonia and Corfu? The happy truth is that, whether you go for the Saronic Islands, the Cyclades, the Dodecanese or the Ionian chain off the mainland’s west coast, a Greek charter enables you to adjust that balance in whatever way suits your mood.

For fans of the western Mediterranean, Turkey often comes as a spectacular surprise. In addition to more than 300 days of sun and a season that runs from April to November, the Turkish Riviera from Bodrum to Göcek, provides everything you could want, from vibrant nightlife and easy-access watersports to classical Turkish antiquity. But for many, the ancient multi-cultural city of Istanbul itself is even more rewarding. As the meeting point between Europe and Asia, with easy access to the Black Sea, the Sea of Marmara and the islands of the north Aegean, its effervescent cultural dynamic leaves a profound impression on everyone who takes the time to visit.